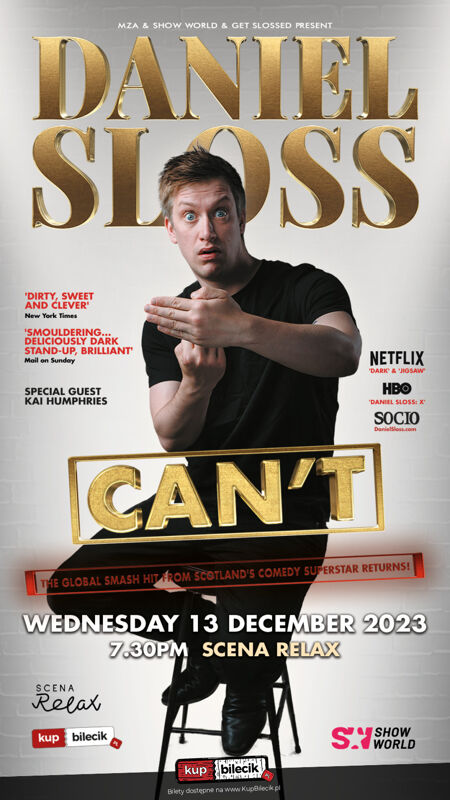 'DANIEL SLOSS - CAN'T is the all-new, 12th solo show by Scotland's international comedy superstar and we are delighted to welcome Daniel back to Warsaw.Daniel's previous ground-breaking, global smash-hits include 'HUBRi. S' (the world's biggest solo comedy touring show and 5th biggest ticket selling event for most of 2021 as reported in Pollstar) and 'X' (his acclaimed tour de force about sexual assault. 'X' toured non-stop for 300 performances over 17 months around the globe, traversing Europe, UK, U.S., Canada, Australia, Hong Kong, Japan and even packing a Moscow arena (becoming Russia's biggest-ever English language comedy show and creating a sensation with a joke about the importance of sex education - not a taboo subject in Putin's Russia - an illegal one.). The film of 'X' is on HBO in USA, Canada and was the first UK comedy special with a UK premiere in cinemas, following a nationwide release at Vue.Daniel's first book "Everyone You Hate is Going to Die" was published by Penguin Random House prestige imprint Knopf in 2021, and his Netflix specials 'DARK' & 'Jigsaw' are both streaming in 190 countries, in 26 languages with the infamous 'Jigsaw' credited with causing over 200,000 breakups and 300 divorces world-wide (fans even bring their divorce papers for him to autograph at shows).He has sold out seven New York solo off-Broadway seasons, appeared on U.S TV's 'Conan' ten times, broken box office records at the Edinburgh Festival Fringe and toured in 53 countries (so far) - this is his new show and it's a strictly limited tour - BOOK EARLY!
With special guest KAI HUMPHRIES*'Dirty, sweet and clever' (New York Times)* Guest may be subject to change. * Please be advised that the performance begins promptly at the time indicated and late admittance is not guaranteed. It is a condition of entry that ticket holders agree to not photograph, film, record or stream the show. Contains strong language. Age 16+ Kup. Bilecik.pl
Słowa kluczowe
# Standup # Scena Warszawa # Scena # Kabarety Warszawa # Kabarety # Standup Warszawa # Standup